It might seem hard to believe, but until now Roland hasn’t had a true competitor to Korg’s seemingly ubiquitous Volca line. Sure, the Boutique range is portable and battery powered, but they’re also twice the price of a Volca. And that’s without the keyboard accessory. Now, though, the company finally seems to be taking the entry level seriously with the Aira Compact series.

These new $199 instruments borrow tech from their big siblings in the Aira line, like the VT-4 Voice Transformer and the TR-8 Rhythm Performer. The T-8 is a drum machine that uses Roland’s Analog Circuit Behavior (ACB) to recreate sounds from the 808 and 909, and the J-6 Chord Synth does the same, but for the Juno-6. While there’s certainly nothing wrong with having more portable budget synths and drum machines, it’s the E-4 Voice Tweaker that really stands out. It brings pitch correction, a harmonizer, vocoding, plus pitch and formant shifting and a looper to the world of mobile music hardware.

The ability to connect all three Aira Compacts, without the need for an external mixer, is undeniably huge. When you’re trying to craft a portable music making setup the less gear and cables, the better.

The T-8 is definitely the most straightforward of the three, and probably the most immediately usable. While it has more advanced features, anyone who’s ever used a step sequencer before should immediately be able to start putting together basic beats. While I guess I should be thankful that you get 32 steps instead of a measly 16, it doesn’t feel like it would strain the hardware terribly to go for a full four bars.

Thankfully, there are some tools at your disposal to switch things up. There is a fill mode, plus step looping for creating instant custom fills by just holding down a few buttons. There’s also per-step and master probability options for introducing a touch of unpredictability, plus substeps, send effects, accent and velocity parameters. In some ways, it’s a more capable sequencer than you’d find on a Volca Beats. That said, Korg has automation in the form of Motion Sequencing, which the Aira Compacts lack. 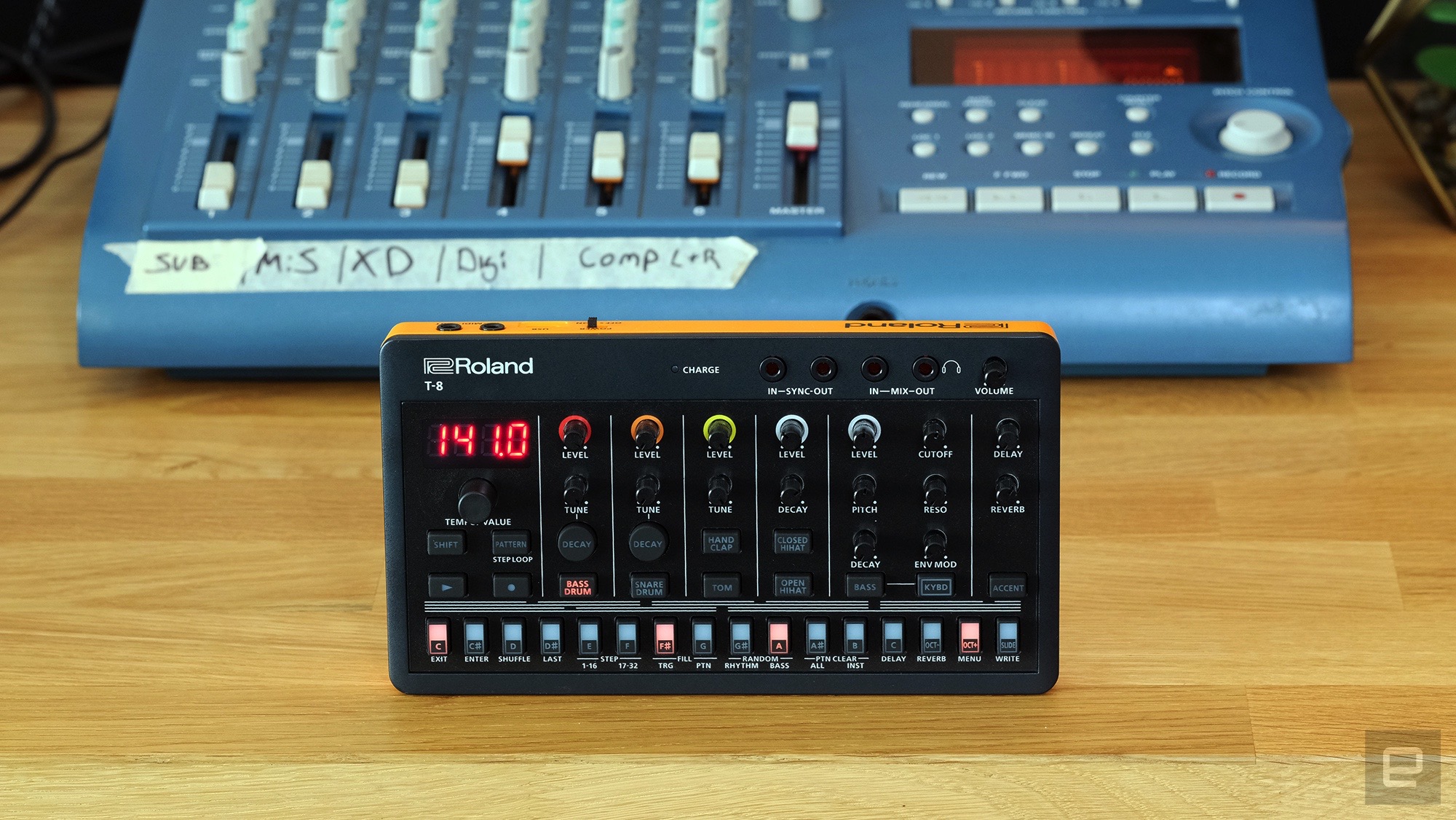 The sounds aren’t particularly flexible without a lot of menu diving, though. From the front panel you can change the tuning and decay of the kick and snare – just the tuning of the clap and tom, and just the decay of the open and closed hihat. If you have a preference for a 707 kick and snare, tough. You get what Roland gives you, which is a mix of sounds from the TR-808, 909 and 606.

You can add overdrive, or switch the bass synth from saw wave to square wave, or swap out the clap for a second tom if you feel like slogging through the T-8’s somewhat arcane menu. But without a manual handy the cryptic eight-segment LED screen is difficult to decipher.

At least things like probability, velocity and effects are easy to manage. A lot of parameters require using the shift function, but it’s hardly the end of the world.

The bass synth is a nice addition. It’s based on the TB-303 and can handle acid basslines with relative ease. Again, there’s not a ton of versatility there. It does what it does, and don’t expect much more. I do wish that you could use the synth’s filter as another send effect, though. It would be nice to route the entire drum pattern through it for buildups and breakdowns.

The J-6 is a somewhat more confounding beast. It’s a four-voice synth, based on the Juno-6. You can play the keyboard normally, but the rubber keys aren’t exactly great for playing in realtime. Instead you’re meant to use it in chord mode, where each key automatically plays a chord. You can switch between 100 different sets (confusingly labeled “genre” on the actual device), each of which contains 12 chords. And, in addition to just punching in the chord progressions manually, there are nine different “styles” with 12 variations each for playing arpeggios and rhythmic chord stabs.

This is great for quickly knocking out something that sounds pretty decent on its own, but I’d be lying if I said I had any idea what was going on. What chords are in what sets? Is there any logic to which variations are lumped together?

The J-6 is also bound to disappoint anyone who wants to design their own synth sounds. There are 64 presets and, if there is a way to design a patch from the ground up I haven’t found it yet. The only controls you have over the synth engine itself from the front panel are filter cutoff and filter release. If you press shift those knobs control the resonance and attack of the filter.

Honestly, though, that’s fine. All 64 sounds here are pretty solid, even if a few of them are a little samey sounding. On something this small, with so few hands-on controls, I’d rather Roland just give me a small excellent palette to work with than force me to spend three hours menu diving. 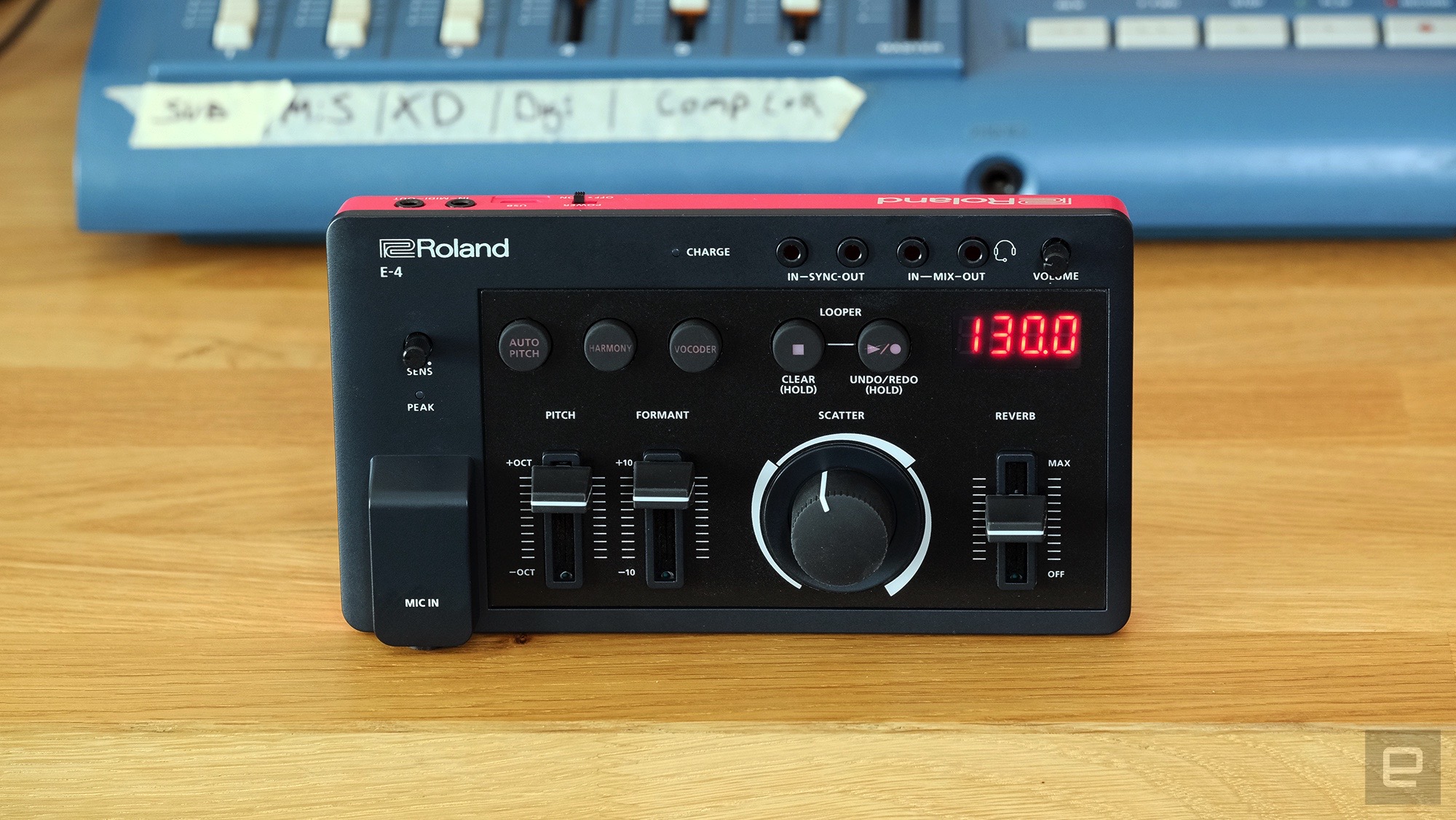 Lastly there’s the E-4. It is an absolute blast. Full stop. It’s not that it doesn’t have flaws, it’s just that frankly they don’t matter much. Do I wish Roland had gone with an XLR input as opposed to a ¼”? Of course I do. Would phantom power have been a nice touch? Sure. But damn it, every time I fire this thing up I have trouble putting it down. The combination of auto pitch correction (you know, the generic version of AutoTune) and synthetic harmonies turn anyone into instant Bon Iver. And if you’d rather get your funk on, there’s a solid sounding vocoder with more waveforms than I can count.

You can also enable all the effects simultaneously, so you can auto pitch your vocals, generate harmonies, and then feed your newly chorded voice through the vocoder to create a choir of robots. Then slap on some reverb, delay or chorus to add even more depth, and start turning the Scatter knob to glitch yourself out in realtime. And yes the vocoder will follow the pitch of auto correct if you use it, or you can control it via MIDI keyboard.

There is also a 24-second looper with the ability to overdub, so if you don’t like the preset harmonies, you can record your own backup vocals. Just remember to set your preferred effects first because pitch, harmony and vocoder are applied before recording. You can still use the reverb and Scatter to mangle your loop after the fact, though. Oh, and yeah, the E-4 has Scatter. It’s still not great, but it does work better on vocals than it does drum patterns.

Roland is bringing some serious firepower to the world of tiny, dirt-cheap music gear. It’s borrowing features and tech from its more expensive instruments that start at $400, and bringing it down to almost impulse purchase levels. In fact, there’s a very good chance I’m gonna go out and buy that E-4 Vocal Tweaker real soon. The sub-$300 range is increasingly important for synth makers, and Roland’s first salvos shouldn’t be dismissed as the company merely playing catch up.