When it launched last year, the DJI Mavic 3 grabbed a lot of headlines with features like a big Four Thirds sensor and a second 7X telephoto camera. But it also drew some criticism for going on sale with key features like ActiveTrack and QuickShots still not available. That meant that I and others couldn’t assess those features in our early Mavic 3 reviews. And because of that, potential buyers couldn’t get a full picture of the drone before paying up to $5,000 for one.

Following three major firmware updates in December, January and May, all the promised functions and more are finally here. Now, I’m going to test them out using the same exact drone to see how well they work. At the same time, I’ll discuss this trend of selling products before key features are available – is this good or bad?

ActiveTrack, Quickshots and other AI features

Last year, I tested the mainstream Mavic 3 (not the Cine model) in the Fly More combo package with my drone pilot friend, Samuel Dejours. At the time, we rated it highly for things like video quality, obstacle avoidance, long battery life and more. However, the coolest AI features were nowhere to be seen.

This time, we’ve got three firmware updates, with the most recent coming from the end of May. Most of the AI features like QuickShots, ActiveTrack 5, MasterShots and others arrive in January. We’re also going to check out the “Nifty” update that arrived in May, allowing the Mavic 3 to fly closer to obstacles with a smoother trajectory.

Prior to Nifty, we tested the Mavic 3’s ActiveTrack and APAS 5.0 obstacle avoidance, and found it couldn’t keep up with the smaller and cheaper DJI Mini 3 Pro. Some of that is down to the Mini 3 Pro’s size and agility, but the Mavic 3 also seemed conservative when approaching obstacles.

In Normal mode, we found that ActiveTrack worked well as long as it didn’t have to deal with many obstacles. It usually flew at the angle and distance set, giving us stable and predictable shots. So it was already a decent tool for solo creators – but it didn’t do the things DJI showed in its Mavic 3 launch video like zipping around trees while filming a guy on a mountain bike.

With Nifty mode, though, it loses that shyness. When used with ActiveTrack, it’s willing to approach obstacles very closely while following your subject. That makes it possible to film in tricker situations and get far more dramatic shots as it passes behind, under and over impediments.

It does make things more unpredictable though, of course. You can never tell what route it’s going to take to avoid obstacles and sometimes it gets lost in the woods, literally. It will also deviate from your pre-selected path, as you’d expect, but then stay there at a new altitude or camera angle. Still, this often results in some interesting and unexpected shots.

However, the extra AI derring-do can put the Mavic 3 in harm’s way, as you’re warned when you turn on Nifty mode – not ideal with a $2,000-$5,000 drone. It might be a good idea to get DJI’s $239 Care Refresh accident protection insurance if you use it frequently. An earlier release of DJI’s app warned that “you will be liable for any adverse consequences” when using the feature, but it no longer says that in the latest version.

Where Nifty is most useful is with manual piloting, we discovered. By engaging it, Samuel was able to fly in tighter spaces without the drone chickening out, while still getting basic obstacle protection. That allowed him to concentrate on the subject while the drone swooped around and passed closely by obstacles, resulting in some pretty thrilling footage.

The January update also introduced QuickShots, letting you do pre-programmed camera movements like Dronie, Helix, Rocket, Circle, Boomerang, and Asteroid. On top of that, the May update lets you shoot Log or HLG while using QuickShots, except for Asteroid mode.

These features are great for social media selfies, and actually not bad for grabbing some quick footage. For instance, if you want a perfect-looking orbit, you don’t need perfect piloting skills – just let the drone and obstacle detection do the job. Just make sure you’re in a relatively clear area.

MasterShots is a similar feature, letting you capture a series of pre-programmed moves. It then joins those shots together to create a little video set to music. It was updated in January with 4K 60 fps shooting, manual exposure adjustment and more.

Panorama offers wide-angle, 180-degree and Sphere modes, a neat but slightly cheesy feature for occasional use. Finally, the latest version of Hyperlapse does a flying time lapse with some cropping to reduce shakes and jitter. It can produce some dramatic shots, particularly for cityscapes with cloud cover and other dynamic situations. The latest version optimizes stability, making for smoother shots – but they’re not perfectly smooth if there’s a lot of wind. 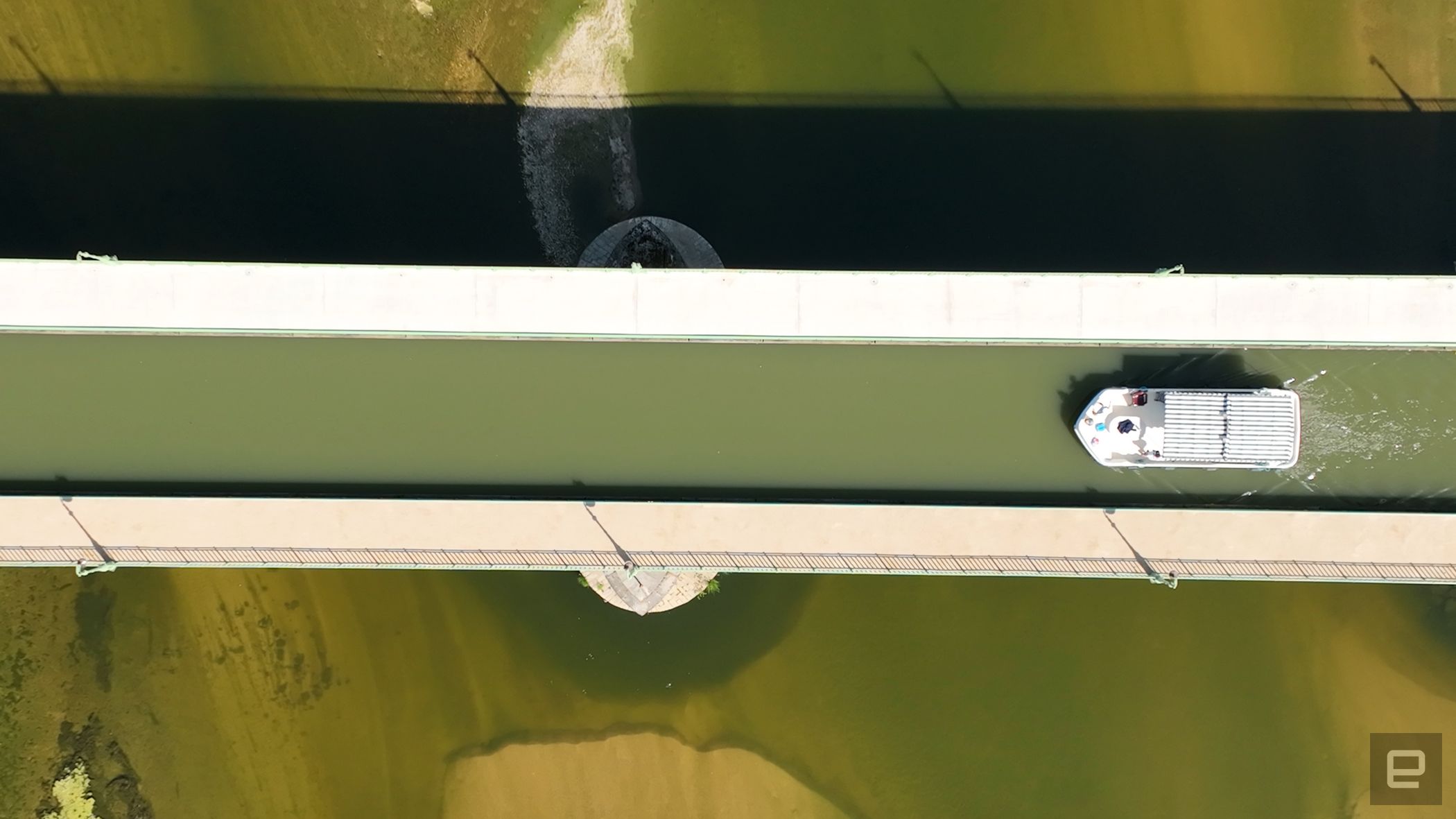 Next, we’ll get into the bulk of updates that arrived in late May, mostly focused on camera improvements. Many of the changes are designed to make the 7X telephoto camera more useful.

The biggest change is the addition of 50 fps shooting for 4K and 1080p, up from 30fps before. It also introduces manual controls, letting you adjust the ISO and shutter speeds. DJI also introduced burst shooting and RAW capture. Those things do make the tele camera more useful and allow for more options in post. But they don’t address the relatively low resolution and mediocre optics.

At the same time, the main camera got a few key updates, like 200 fps slow motion at 1080p (with a significant crop), HLG for in-camera HDR capture, and a three times digital zoom. The latter is a welcome update, as it offers higher quality and more options (HLG, Log, 120fps slow-mo) than the tele camera.

Combined with earlier updates that added improved color accuracy and more, you can take full advantage of the larger sensor. It’s now good enough to replace much bigger drones that pack physical cameras in some cases, at a much lower cost. And while the tele camera doesn’t offer the best quality for content creation, it’s great for things like bird spotting, industrial work and more.

Finally, it’s worth noting that DJI appears to have fixed the GPS issue that caused a slow home lock on startup – a problem that has plagued users since launch.

With all of that, the Mavic 3 finally delivers on its potential and DJI’s marketing. It does beg the question of why it went on sale without those things in the first place, though. I saw plenty of complaints from potential buyers, YouTubers and others to that effect.

I’m personally fine with it though. DJI is generally reliable with promised updates, other than the Ronin 4D RAW video debacle. Key features like image quality were present from day one, so buyers could immediately use the Mavic 3 to create content and make money. QuickShots, ActiveTrack and a lot of the other AI features are nice, but certainly not mandatory for many pro users

The biggest problem was that users couldn’t assess missing features ahead of purchase. To solve that, companies like DJI should at least have them ready in beta for reviewers, so we can give potential buyers a flavor of them. Details like that can weigh heavily on a buying decision for such an expensive product.

Samuel feels the same way. He was able to exploit the Mavic 3 for professional use, filming cityscapes, events, weddings, parties and more. Image quality was the most important factor for him, and while he did want the AI features, he was willing to wait. I think many other pros would feel the same – let us know what you think in the comments below.