With its last batch of MacBook Pros, Apple gave its more demanding fans everything they wanted: Tons of ports, lots of power, and genuinely great screens. As usual, the company is following up that major redesign with a straightforward chip upgrade, featuring the new M2 Pro and M2 Max. They’re faster, as you’d expect, but they also deliver a few features power users may appreciate, like 8K video output and support for WiFi 6E.

Once Apple locks in a redesign, it typically doesn’t mess with a good thing (save for complete disasters like the trashcan Mac Pro). So it’s no surprise to see that this year’s MacBook Pro 14 doesn’t look any different than the 2021 model. It still boasts a gorgeous 14.2-inch Liquid Retina XDR display with ProMotion support and a prominent notch housing a 1080p webcam. It has all of the ports you’d actually want, including a MagSafe power connection, three Thunderbolt 4 USB-C ports, HDMI, a headphone jack and a full-sized SD card slot. And the overall shape of the computer remains relatively flat, an evolution of the long-lived unibody MacBook Pro design.

Under the hood, though, the MacBook Pro 14 has been dramatically upgraded. It can be equipped with Apple’s new M2 Pro chip, which offers up to a 12-core CPU and 19-core GPU, or the M2 Max, which squeezes in a 12-core CPU and 38-core GPU. Much like Intel’s new hybrid processors, as well as mobile chips from Qualcomm, Apple relies on a combination of core speeds for its CPUs (the 12-core chips, for example, have eight performance cores and four efficiency cores). The previous M1 Pro and M1 Max topped out with 10 CPU cores and 16 or 32 GPU cores, respectively.

These are phenomenal results if you’re planning to use the MacBook Pro to its full potential. But I’ll admit, during everyday usage, I didn’t notice any major performance benefits over the previous models. That’s not really a knock against the new computer, it’s more a testament to how much Apple got right last time. Unlike PCs, you probably won’t be gaming too much with your Mac, either, so there’s less of a reason to chase frequent upgrades. On that note, it’s nice to see some modern games with native Mac support. Resident Evil Village easily hits 60fps on the MacBook Pro at full resolution, but I wouldn’t be surprised if the same was true for the M1 models. 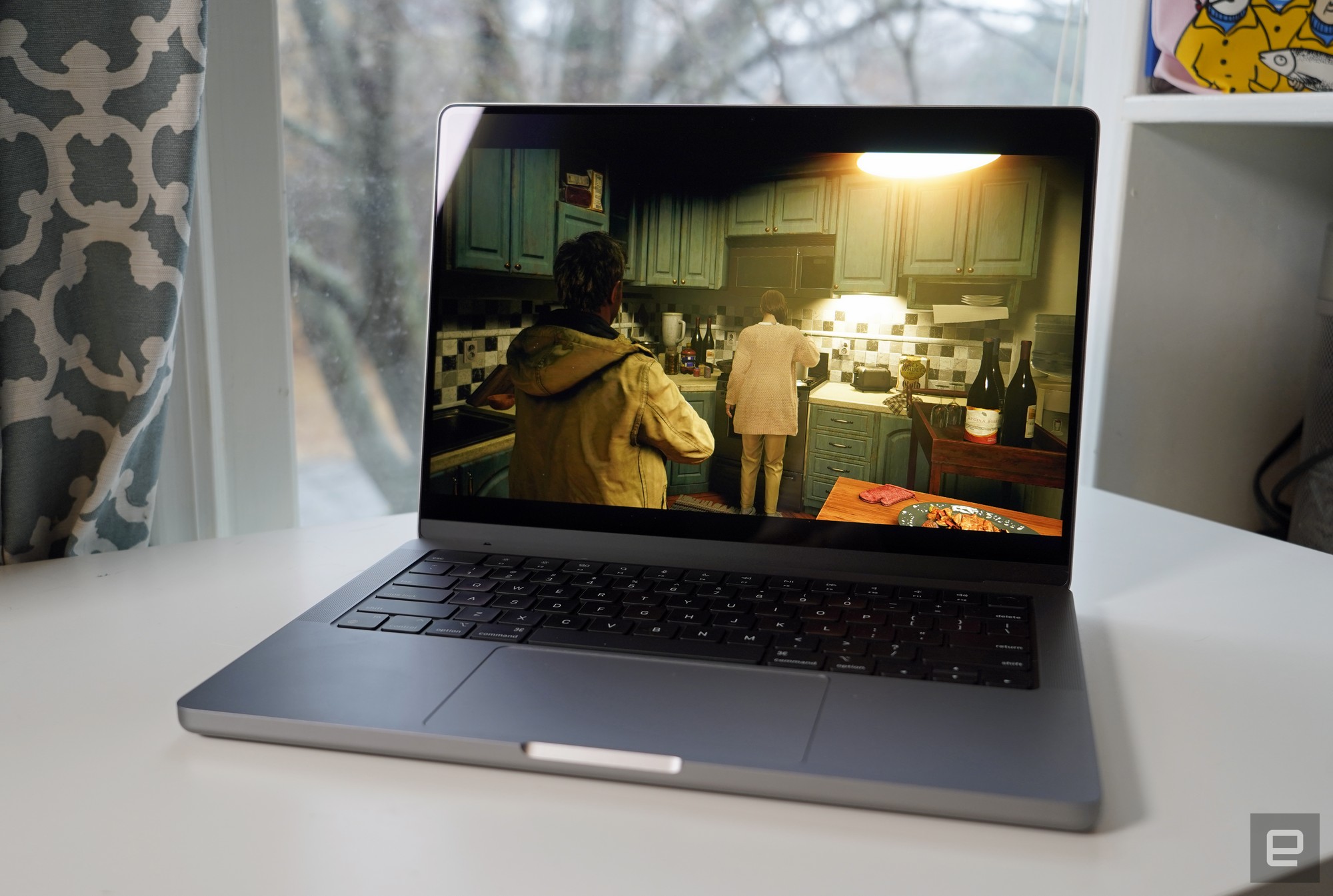 If you’re among the folks dealing with large video encoding or high compute jobs daily, though, it may be worth moving up from the last MacBook Pro. It took me 31 seconds to transcode a minute-long 4K clip into 1080p using Handbrake — but the M1 Max MacBook Pro 16 took a full 10 seconds longer. Extrapolate that to longer jobs and you could be saving yourself some serious time. And if you’ve managed to hold out with an Intel MBP until now, it’s definitely time to upgrade — you’ll easily see a night and day difference in speed.

Aside from its performance, the MacBook Pro 14 remains a wonderful workhorse to live with. The MiniLED Liquid Retina display looks fantastically bright, especially when viewing HDR content. Mostly, though, I appreciated the smooth scrolling thanks to Apple’s 120Hz ProMotion refresh rate. The six speaker sound system remains excellent, with crisp and punchy audio that’s leagues ahead of most other laptops. And I remain impressed with the MacBook Pro’s built-in three-mic array. It’s no replacement for a dedicated USB microphone, but it sounds great during video calls.

The MacBook Pro’s keyboard is certainly better than the old butterfly models, but I wish Apple was able to deliver more key travel. It’s still great to type on, to be clear, I’m just feeling a bit spoiled from the mechanical keyboards I’ve seen in some gaming laptops. The Pro’s trackpad remains best in class though, with a large surface area and responsive performance. After testing the XPS 13 Plus last year, which featured an attractive yet hard to use trackpad hidden in the wrist rest, I’m even more appreciative of Apple’s clean design. It turns out that being able to feel the difference between the trackpad and the wrist rest is pretty helpful!

Apple is touting better battery life as another major benefit of the M2 Pro and Max chips, and I definitely noticed an improvement. The previous MacBook Pro lasted 12 hours and 36 minutes during our testing, but the new model made it to 15 hours and 10 minutes. That’s a healthy step up, especially if you find yourself stuck on a long flight without any working outlets. Apple says that the new MacBook Pros can reach up to 22 hours of battery life, but take note that figure only refers to the 16-inch model.

Just like last time, the 14-inch MacBook Pro starts at $1,999 — a huge leap from the $1,299 13-inch model. I’m still a bit baffled by that MacBook Pro, though. Most mainstream shoppers would be better off with the revamped M2 MacBook Air, while power users would prefer the beefier 14-inch model. If you’re aiming for something bigger, the 16-inch MacBook Pro starts at $2,499. New gear also means the old models will inevitably go on sale, so it’s worth keeping an eye on the M1 Pro and Max machines if you’re aiming to save some money. Sure, they’re a bit slower, but you could put that extra money towards buying more RAM or storage.

It’s no wonder Apple announced the new MacBook Pros without much fanfare. It’s just a simple spec bump, not the sort of thing most buyers would get too excited about. But for the creative professionals who need the most power possible, it’s another reason to stick with Apple instead of jumping to a PC.