Who wouldn’t want a small box that can spit a 120-inch image onto your wall? That’s the basic pitch behind 4K ultra short-throw (UST) projectors, which are sometimes called “Laser TVs.” They’re technically easier to set up than traditional projectors, and unlike large TVs, they don’t require a huge footprint. Once you’ve placed it in front of a screen (or treated wall), you can summon an enormous cinematic image in an instant.

We’ve reviewed a few UST projectors over the years, most recently Formovie’s excellent $3,000 model. Personally, I’ve been in love with LG’s Cinebeam HU85L since we first saw it in action in 2019. Sure, it was expensive at over $6,000, but that was far less than the $10,000 earlier models cost (and certainly better than Sony’s early eye-watering $30,000 to $40,000 UST projectors). Much like LG’s first OLED TVs, the CineBeam represented everything I wanted from the future of home cinema.

Now after spending a few months with the company’s latest UST, the CineBeam HU915QE, I’m even more enamored. It’s brighter than its predecessor, reaching up to 3,700 lumens with a 2,00,000:1 contrast ratio, which makes it ideal for daytime viewing and HDR content. (Unfortunately, it doesn’t support Dolby Vision, a rare feature we were surprised to see on the Formovie UST.) The new CineBeam can also be pushed even closer to your wall with the ability to spit out a 90-inch 4K image from 2.2-inches away, or a 120-inch image from 7.2-inches. I just wish it was cheaper than $5,000 — with the Formovie unit coming in at thousands less, it’s hard to justify LG’s premium.

The HU915QE looks similar to most other UST projectors — it’s just a large rectangular box — and its design is practically the same as the previous CineBeam. Still, LG gave it enough flair to make it look at home in a classy living room. Its front speaker is covered in cloth, and the entire unit is encased in a solid light gray plastic. (There’s also a black model for better nighttime viewing, though that one inexplicably spits out a darker image.) Around back, there are three HDMI ports, 2 USB connections, an optical audio port and Ethernet. It’s not exactly heavy, at 26.9 pounds, but you definitely need a wide table or credenza to align it with your screen.

That setup process, by the way, is more annoying than you’d think. Configuring any projector is a pain, as you’ll need to place it in just the right spot to fill your screen. With a traditional long- or short-throw projector, you’re often able to shift the lens around manually. But configuring a UST like the CineBeam involves finding the exact height and distance from the screen to make everything look perfect. If it gets nudged by even a millimeter, the image will simply look wrong. That makes USTs less than ideal for homes with small children or overzealous pets. (Also, you don’t want kids peeking into the projector lens, as it’s bright enough to cause serious eye damage. That’s hard to do with a traditional projector, but far too easy when it’s just sitting on the floor)

When I tested the previous CineBeam HU85L, it took me a few hours to find the proper position to work alongside my dropdown projector screen. That involved buying a small table and stacking a few wide boxes to get everything aligned. Even then, I couldn’t quite get the image to fill every corner of my screen properly. That’s when I learned that dropdown screens aren’t ideal for UST projectors (Engadget’s Steve Dent also found that small creases in dropdown screens could lead to rippled images). Ultimately, I was able to get the older CineBeam to fill around 98 percent of my 120-inch screen, but I gave up on the dream of having the whole thing covered.

Thankfully, I was able to drop the HU915QE into the exact same spot as the earlier CineBeam. After tweaking the manual focus wheel a bit, it ended up covering the same area of my screen. If you’re building your home theater or living room around a UST projector, you’ll ideally want to use a tensioned ALR (ambient light rejection) screen. Those are built to block light from everywhere but your projector, which means they’ll deliver even better brightness and contrast. If you want to use a UST during the day like a TV, you’ll definitely want to push away as much ambient light as possible. 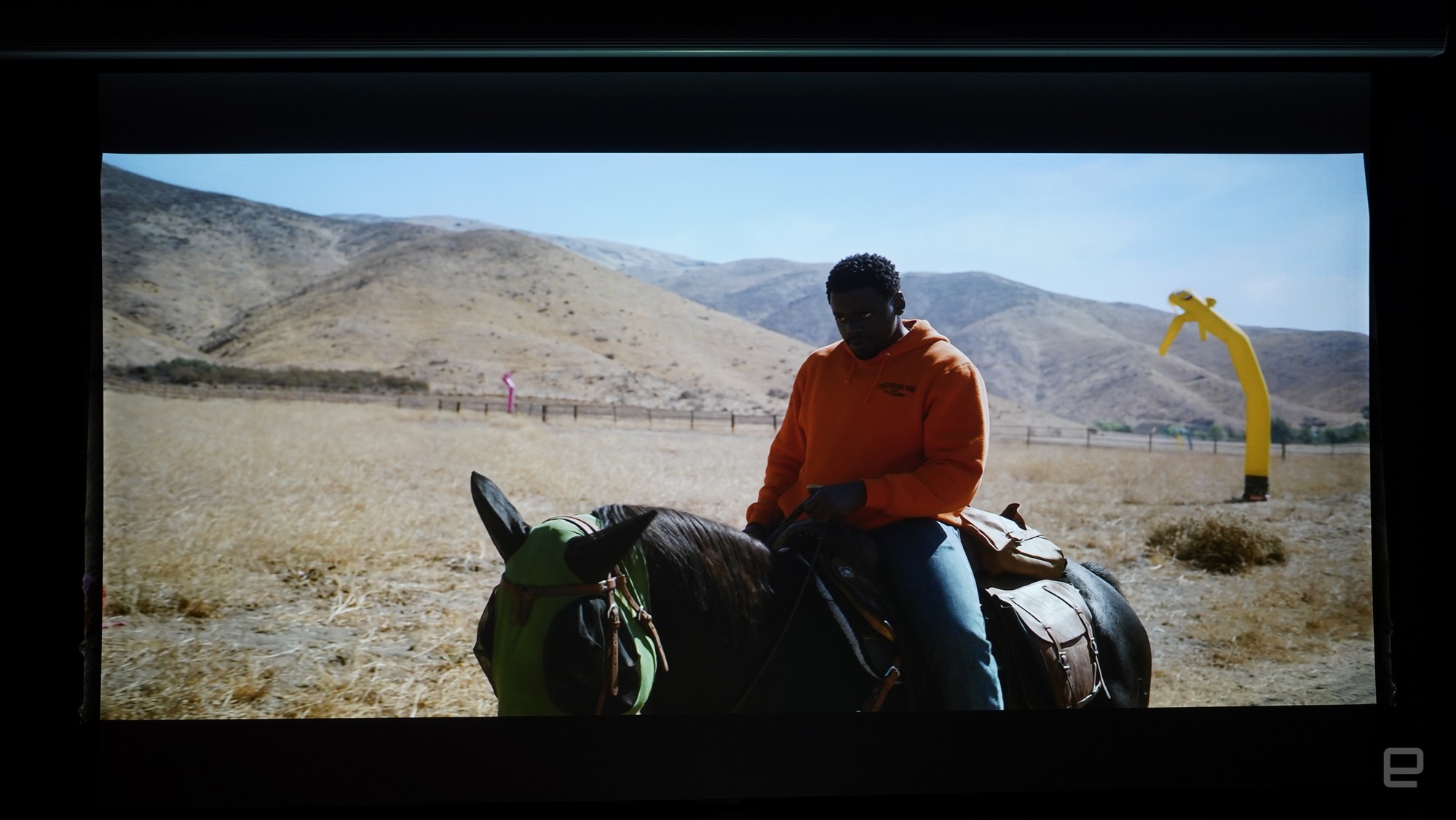 While my setup wasn’t ideal, the CineBeam HU915QE still delivered most of what I wanted: A large and luscious dose of cinema in my basement screening room. Almost immediately, I noticed that it produced richer and more vibrant colors than the CineBeam HU85L. Colorful films like Thor Ragnarok looked just fine on the previous projector, but the new model delivered a far bolder dose of cosmic psychedelia. The improved contrast also made the HU915QE better suited for dark scenes, like the spooky nighttime sequences in Nope where you’re trying to make out something floating through the clouds.

The HU915QE is a triple laser projector, relying on red and blue lasers for their respective primary colors, as well as another blue laser shining through a phosphor to create green. That setup works well, but it can only reach 94 percent of the DCI-P3 color gamut. Newer UST projectors with three distinct RGB lasers, like the HiSense PX1-Pro, can reach a wider 107 percent of the BT.2020 gamut. Like many other UST units, the HU915QE relies on pixel shifting to achieve a visible 4K resolution. It has a native resolution of 2,716 x 1,528, which is shifted twice to hit 4K. The result is an image that’s sharper than cheaper projectors, which typically have 1080p native resolutions with four-phase shifting.

After spending a few hundred hours watching everything from streaming shows like Midnight Mass, to blockbuster action films like Top Gun: Maverick, I found myself preferring the experience of using the HU915QE compared to trekking out to the theater for many films. And, to be clear, that’s a pretty big deal for a movie lover like me. Even with the COVID-19 pandemic threatening the viability of theaters, I’ve held out hope for a comeback. The strong box office performance of the Top Gun sequel and Avatar: The Way of Water makes me think that there’s still room for the true cinematic experience (though as I write this, Regal is shuttering more locations in the US after its parent company Cineworld declared bankruptcy last September). Those films, as well as the recent Dune adaptation, are so large and bombastic that even a 120-inch home projector can’t fully capture their grandeur. But the HU915QE sure comes close.

Like most projectors, the CineBeam HU915QE isn’t ideal for gaming thanks to its noticeable input lag. Still, I had a great time playing PS5 titles like God of War Ragnarok, Ratchet and Clank: Rift Apart and even the fast-paced Returnal on my giant screen. LG hasn’t issued any latency figures, but some reviews peg the projector’s input lag between 50ms and 67ms. There’s an auto low-latency mode that cuts off extra processing to speed things up, but you obviously won’t be using this thing for lightning-fast competitive gaming. Based on my experience with the 55-inch Samsung Odyssey Ark, though, that’s not something you’d want to do on a gigantic display anyway. Twitch gaming requires smaller screens so you can actually focus on all of the super-fast action.

When it comes to sound, I can’t imagine that anyone buying a $5,000 projector would be relying on built-in speakers, but it may make sense if you just want to avoid extra clutter in your living room. The CineBeam’s 40-watt 2.2 speaker setup sounds good enough for casual viewing – it’s certainly far better than what you’d get on modern TVs. It’s basically a fairly simple soundbar sitting below the projector, but it delivers clear dialogue and some surprisingly boomy bass. Seriously though, look into surround sound systems if you’re actually buying this thing. You deserve it.

While I spent most of my time using an Apple TV 4K, the HU915QE is also powered by LG’s WebOS platform, which offers all of the smart TV apps you’d expect. That’s nice to have, especially if you don’t want to juggle multiple remotes, but I’d wager most home theater fans will stick with their set-top box platform of choice. If you’re used to WebOS from LG’s OLED TVs, you’ll feel right at home with this projector. It even uses the same Magic Remote found on LG’s TVs, which has voice controls and (so-so) motion controls.

As much as I loved the CineBeam HU915QE, it’s not exactly priced competitively against newer entries like the $3,000 Formovie Theater. Sure, that’s not as bright, but at half the price of the CineBeam, that projector delivers Dolby Vision, great sound and excellent image quality thanks to a modern triple-laser setup. You can easily add in an excellent $2,000 surround sound system to match the CineBeam’s price . As for other high-end competitors, the HU915QE competes directly with Hisense’s much-lauded L9G, which currently sells for $4,500 to $5,000 depending on the screen you get. Samsung’s Premiere LSP9T triple-laser UST also retailed for $6,500 when it debuted, though it can now be found for around $3,500 at online sellers.

If you’re an LG loyalist, the CineBeam HU915QE is still a very compelling UST projector. It offers enough brightness to use during the day, and it’s vibrant enough in darker rooms to deliver a truly cinematic experience. But it’ll be an even better buy once it comes down in price.