From the moment Canon launched the full-frame mirrorless EOS R, everyone wondered if it would use the same mount for APS-C cameras and effectively kill the EF-M system. It did just that in May, launching not just one but two RF APS-C cameras. One was the flagship $1,500 EOS R7 that I tested last month, and the other is the $980 EOS R10, the subject of today’s review.

For that considerably lower price, some features are missing. It has a lower-resolution 24-megapixel sensor versus the R7’s 33 and is missing some of the R7’s highlight features like in-body stabilization and a second card slot.

Surprisingly though, it nearly matches the R7 in shooting speeds and offers similar video specs. It also has the benefit of being smaller and lighter for travel, street shooting and more. But technical details aside, how does it perform in the real world, particularly for casual users and beginners? I took it on vacation and did some sports and street shooting to find out.

Much like with the EF and EF-S lens mounts used on Canon’s DSLRs, the R10 uses the RF-S mount that’s compatible with full-frame RF mount cameras. As such, it supports every full-frame RF lens and also works with the two new RF-S lenses released with the R7 and R10. However, those are only kit lenses, so if you want a prime lens you’ll need to either buy a full-frame lens or use a DSLR EF lens with an adapter.

The R10 isn’t as pretty as its rival, the Fujifilm X-T30, but it’s better-looking and easier to use than any of Sony’s boxy APS-C cameras. It’s quite small and light, weighing just 426 grams, considerably less than the 612-gram R7 and just a bit more than the Sony A6400.

Despite the small size, it’s got a generous array of physical controls. That includes a pair of dials for exposure, a mode selection dial, a joystick, a D-pad and an AF/M button. You also get a focus selector switch on the front, a record button on top and five programmable buttons across the back and top.

Canon didn’t try anything fancy here as it did with the touch control on the EOS-R, and everything is easy to find, particularly if you’re used to Canon cameras. The grip is deep, though your fingers can get cramped with a large lens installed. The menus are typical Canon, so they don’t exactly have a fresh modern look, but they’re easy to use.

Like every other R-series camera so far, the R10 has a flip-out screen for vlogging and selfies. Canon is clearly marketing this at vacationers, young people and YouTubers, so this feature is a must. The EVF is mediocre though, with a low-res 2,368K screen and low magnification. To be fair though, other cameras in this price range have similar EVs.

The R10 has a single SD card slot and small 1,040 mAh LP-E17 battery. That’s also par for the course in this category, but it means that you can’t back up your photos so you could lose them if your card is corrupt. Battery life is also on the low side at 450 shots max (with the monitor) or about an hour of 4K 30p video shooting.

It has a USB-C port for data transfers and charging, but it’s fussy about which chargers you can use. I didn’t have any luck with any of my phone chargers or cables, so you’ll need to check what Canon recommends. It has a micro HDMI port, along with WiFi and Bluetooth and comes with a microphone input but no way to connect headphones. By comparison, Fujifilm’s X-T30 lets you hook up headphones with an iPhone-style USB-C adapter.

The R10 does the main thing most buyers want: it takes sharp photos, quickly. It can shoot at up to 15 fps in mechanical shutter mode, an impressive figure for a consumer camera and the same as the R7. In electronic mode, it can hit 23 fps, just 7 fps shy of its pricier sibling. However, you’ll need to beware of rolling shutter in silent mode that can skew photos if the camera or subject moves too quickly. But it’s not as bad as the R7 in that respect.

With a smaller buffer than the R7, it can only sustain those bursts for around two seconds, so you’ll need to time your shooting well. It does support UHS-II SD cards, though, so it can clear the buffer quickly if you have a fast card. 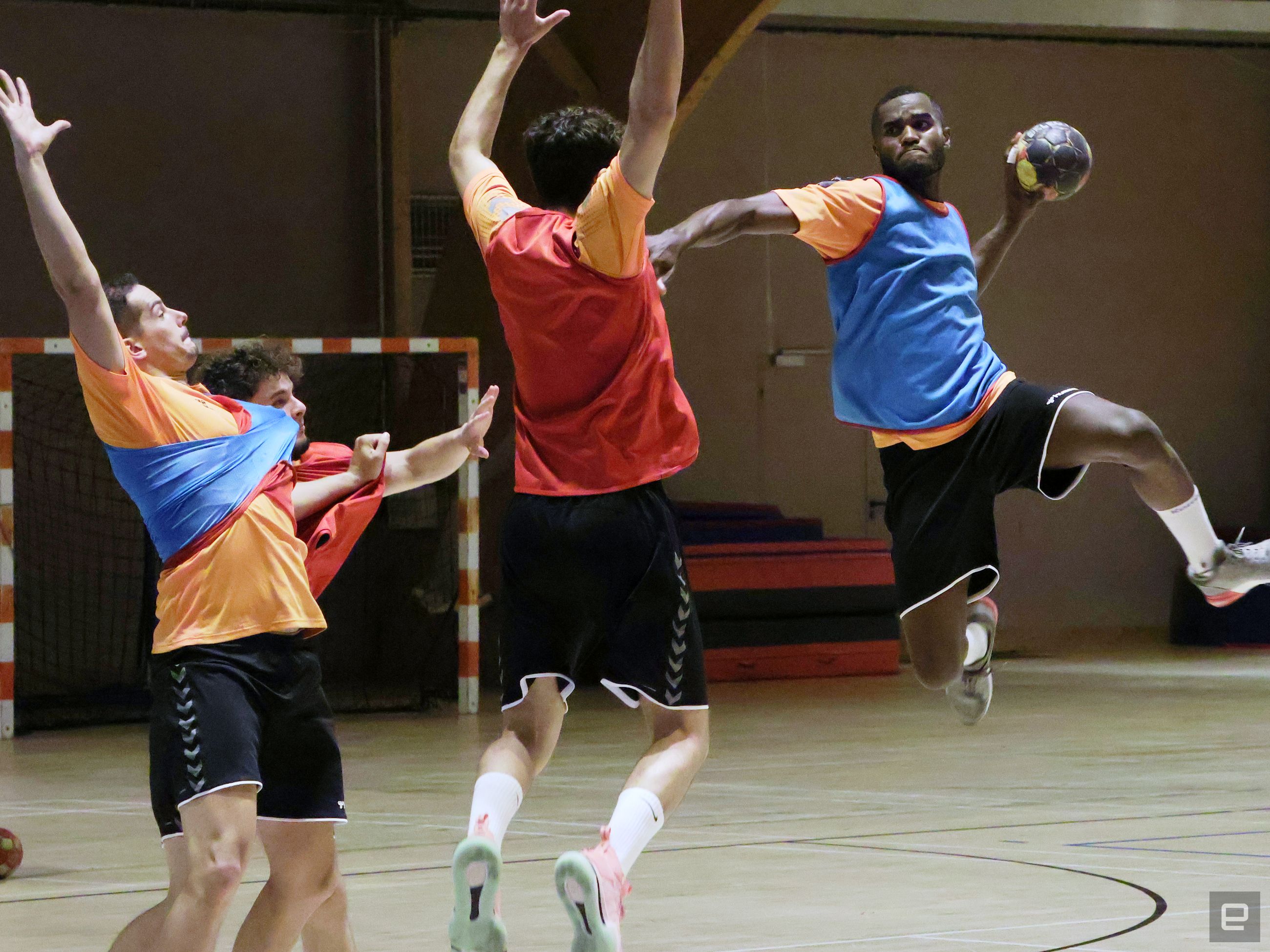 The best feature of this camera is the AI-powered Dual Pixel autofocus that’s similar to what you find on the R7 and even the professional EOS R3. It allowed me to keep fast-moving subjects in focus, either by keeping the AF point on them or using face and eye tracking. You can track people, animals and vehicles, but it doesn’t really support tap-to-track like other Canon models.

With people or animals it’ll fluidly track the head or eyes, and does a great job of switching between the two seamlessly. For racing vehicles, it attempts to focus on the helmet of the driver. The system is responsive, reliable and nearly idiot-proof, smoothly tracking subjects whether you’re in point or wide area AF modes. That makes it great for beginners who may not want to dive into the manual to figure out complex settings for subject tracking.

The R10 delivers accurate colors with warm skin tones like most photographers want. JPEGs strike a good balance between sharpening and noise reduction, while RAW files deliver decent but not spectacular dynamic range. That allows for a good amount of room to tweak images.

Low-light performance is a weak point, however. You can consider ISO 6400 to be a hard limit, and even then, you’ll get a lot of noise if you try to boost blacks on underexposed shots. ISO 12,800 is possible in a pinch, but I wouldn’t recommend it if you need a clear photo. The lack of in-body stabilization also means you’ll risk getting blurry photos at shutter speeds under 1/100th, unless your hands are spectacularly steady.

As I frequently forgot, though, the R10 does have a built-in flash that’ll let you at least get a clear though not very artistic photo if you don’t have enough light. Just make sure to dial the flash strength down in the settings to avoid blowing out your subject.

The R10 is one of the best APS-C cameras for video. You get sharp, downsampled 4K at 30 fps or less, and cropped video at 60 fps that’s not as sharp but certainly still usable. If you want super slow, it can shoot at 120 fps at 1080p, but video is obviously softer still.

It’s also the only sub-$1,000 APS-C camera I can think of that offers 10-bit video via the HDR PQ mode. However, unlike with most log video, you won’t find a standard lookup table (LUT) for this in Adobe Premiere or other editing systems. So unless you play the video directly to an HDR TV, it can be tricky to work with.

Autofocus isn’t quite as good for video as for photos, as the system occasionally focuses on the background instead of the subject. That doesn’t happen often though, so the video I shot was usually sharp except in a few cases.

The lack of in-body IS means you’ll need to use stabilized lenses for handheld video. And for anything like vlogging, you’ll also want to turn on the electronic stabilization or even use the enhanced IS. Electronic IS adds a significant crop, on top of the 1.6X APS-C crop, so the two kit lenses are just barely wide enough on the 18mm end of the zoom.

Vlogging at 60 fps adds another degree of difficulty, as you get a further 1.56x crop, so the 18mm lens becomes nearly a 50mm lens. While vlogging, I found I could barely fit my head into the frame, even while using a Joby Gorillapod to add some extra arm length.

Rolling shutter can also be an issue, particularly for oversampled 4K 30p video, though it’s far less severe than in Sony’s APS-C cameras. It improves in 4K 60p mode because there’s less sensor to read out, but again, you’re facing a serious crop and softer footage.

As with photos, video quality is excellent with dynamic range on par with rival cameras, though a bit less than what Sony has on offer. The oversampled video is very sharp and again, colors are precise and skin-friendly. You can get extra dynamic range shooting in HDR mode for sunsets and the like, but again, beware that it requires some work to look any good.

There is room for improvement, though. It’s not as huge a leap as I’d hoped over Sony’s $900, two-year-old A6400. And while it has 10-bit capability and better autofocus than Fujfilm’s $900 X-T30 II, the latter is better overall for video and has slightly higher resolution. It’s also a bit too expensive to qualify as a true budget camera.

Still, this camera is bound to appeal to users who want to step up from a smartphone and are tempted by Canon’s solid reputation. They won’t be disappointed with the R10, because it’s easy to use and delivers where it counts with sharp, nice-looking photos and video.